The 2015-2020 Dietary Guidelines for Americans can be found on the health.gov site. The site states that the guideline is designed to help Americans eat a healthier diet. Before doing any research on this topic, I understood the importance of a healthy diet. This past week I’ve been packing up for a move and as a result, I’ve not had an opportunity to do much cooking—instead having a lot of takeout. Two weeks ago when I was cooking, there was a bit more spring in my step. The difference in my body when I cook meals with vegetables, protein, and whole grains compared to eating takeout is obvious.

Chapter 1 of the Dietary Guidelines for Americans has a section titled “Associations Between Eating Patterns and Health.” According to that section, “strong evidence shows that healthy eating patterns are associated with a reduced risk of cardiovascular disease (CVD). Moderate evidence indicates that healthy eating patterns also are associated with a reduced risk of type 2 diabetes, certain types of cancers (such as colorectal and postmenopausal breast cancers), overweight, and obesity. Emerging evidence also suggests that relationships may exist between eating patterns and some neurocognitive disorders and congenital anomalies.”

I Believe The Children Are Our Future

Safe to say, a healthy diet is important. It is even more important to those that are still developing—children. Unfortunately, due to the current pandemic and poor government policies, children are not only suffering from poor diets, many are going without meals.

Brynne Keith-Jennings, a Senior Research Analyst for the Center on Budget and Policy Priorities, shared research stating, “9 to 14 percent of adults with children reported that their children sometimes or often didn’t eat enough in the last seven days because they couldn’t afford it, and that translates into millions of children.”

I’ve spent most of my life in America and I’ve experienced a lot of its greatness. This country has afforded me countless opportunities that would’ve been challenging in Jamaica, where I was born. Truly “the land of opportunity.”

But what kind of opportunity are we giving children when they aren’t eating enough due to parents' economic hardships? I’ve heard the talking point that parents shouldn’t have children if they can’t afford them, but for those that pose this question, how is the child at fault?

Personally, I’ve never had to go to bed hungry. When I first moved to Brooklyn, I remember my stepmother and I going to our local supermarket and using food stamps to round out our meals. Although I was a picky eater, my family saw that I was fed every night. While in school, I never had to worry about my next meal. For this I am grateful. Unfortunately, there are currently millions of children that don’t have the same luxury.

"People claim education is the best means of combating poverty, but that formula is only successful if children are able to engage with learning. No child can engage and sustain concentration on an empty stomach" 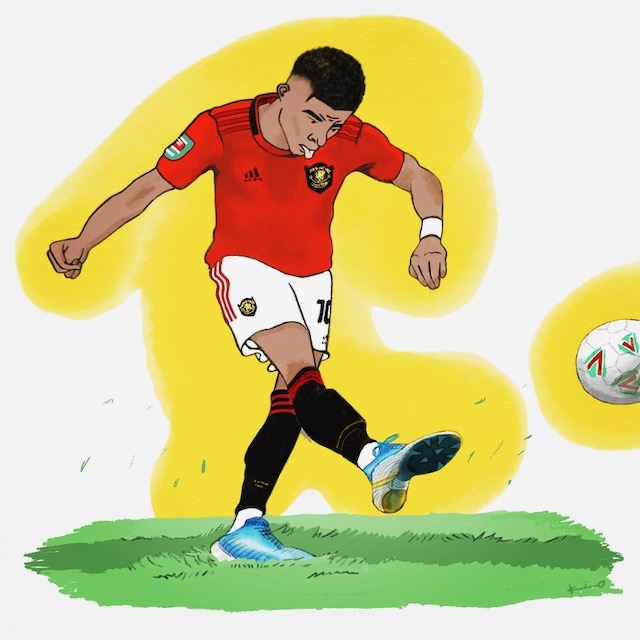 If you’re a fan of the English Premier League, chances are you’ve heard of the 23 year old Manchester United Football Club and England national football team forward, Dr. Marcus Rashford MBE. The title of Dr. and MBE were given to Rashford as an honor for his efforts to end child hunger in the United Kingdom (UK). He received his honorary doctorate from the University of Manchester. The Member of the Order of the British Empire (MBE) is an honor given to him by the Queen. While these titles are a great honor, the work he has done deserves so much more.

It’s not the titles that Rashford is after. His main goal is to have a UK where no child has to go through their day without proper nutrition. At the beginning of lockdown in the UK, Rashford shared the following tweet: 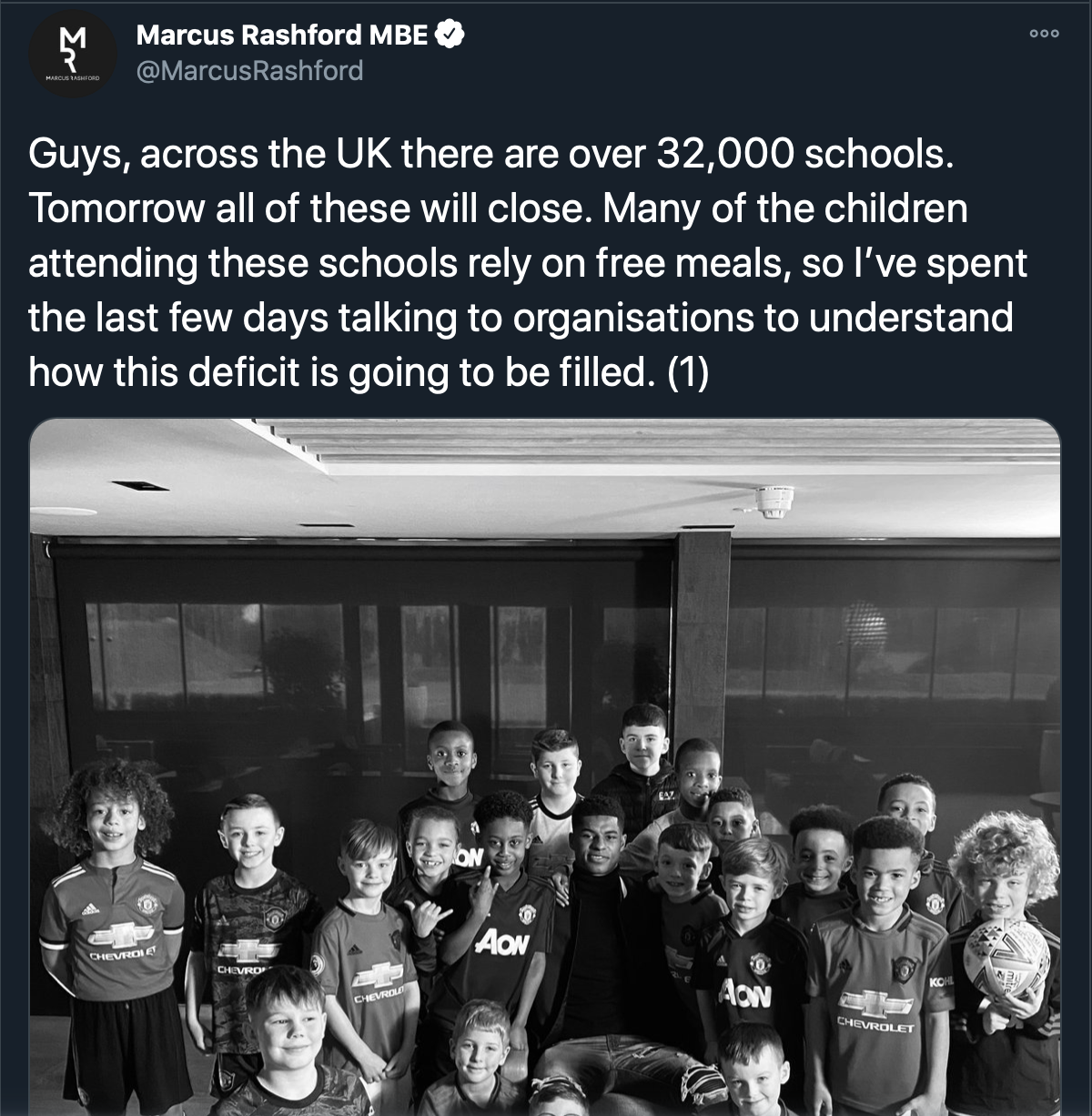 Rashford took up this initiative because it is something that is relatable to his time growing up in the Wythenshawe area of Manchester, UK. Sharing a little of his childhood, Rashford writes, “My mum worked all day every day when I was growing up to make sure I had at least one meal on the table every night. I needed breakfast club and free school meals otherwise I didn’t eat until 8/9pm. Not every child is fortunate enough to get that evening meal…”

The federal government is assisting states struggling to feed their youth. However, this help shouldn’t be limited to when we are in a pandemic. It is my opinion that our country should always ensure that its children are being properly fed. It’s in the best interest of our country.

Recall the Dietary Guidelines, which states that a healthy diet helps prevent disease and issues with the brain. We want the minds of our future to be as healthy as possible. I ask that you reach out to your local and state representatives and tell them that child hunger is something you’re concerned about and want them to make eradicating it a legislative priority. Let them know they need to act.

According to an article from The Intercept titled “HUNGER IN AMERICA, ESPECIALLY FOR CHILDREN, HAS “SKYROCKETED” DURING COVID-19, DATA SHOWS,” “From large cities to modest towns, private food banks report being overwhelmed. Thousands line up in their cars in Texas to get food. There has been a 600 percent increase in demand at a South Florida food bank. In New York City, the number of people being served by one emergency food pantry went from 3,715 in February to over 18,000.”

"Put aside all the noise, the digs, the party politics and let's focus on the reality… We must stop stigmatising, judging and pointing fingers. Our views are being clouded by political affiliation. This is not politics, this is humanity. We talk about the devastating impact of Covid-19 but, if projections are anything to go by, child food poverty has the potential to become the greatest pandemic the country has ever faced. We must start working together and unite to protect our most vulnerable children.” - Dr. Marcus Rashford MBE